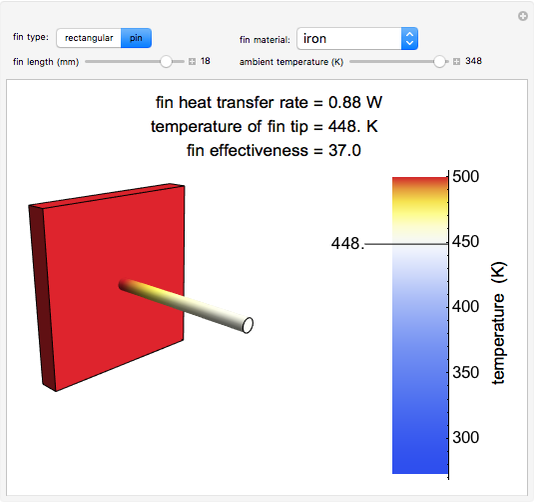 This simulation calculates the heat transfer rate through a single fin (either a rectangular or a pin fin) mounted on a heat sink at 500 K. Air flows laminarly across the fin in the direction indicted by the arrows in the figure (rotate the fin with a mouse to help visualize the flow pattern). The fin tip is adiabatic. Use sliders to vary the fin length and the air temperature. Select the fin material from the drop-down menu. The temperature distribution is shown on the fin surface using a color scale (red is hottest, blue is coolest), and the temperature of the fin tip is shown on the scale. Both the rectangular fin thickness and the pin fin diameter are 1.5 mm. The heat transfer rate through the fin is displayed above the fin, as is the fin effectiveness, which is the ratio of the fin heat transfer rate to the heat transfer rate without the fin.

This simulation was made at the University of Colorado Boulder, Department of Chemical and Biological Engineering.  Author(s): Rachael L. Baumann