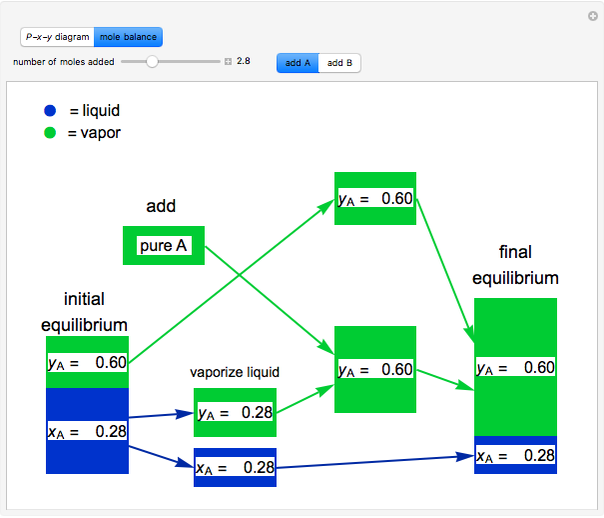 This simulation illustrates what happens to a binary mixture initially in vapor-liquid equilibrium when a pure component is added at constant temperature and pressure. If both phases remain after the addition, it illustrates how the phase mole fractions (xA is the mole fraction of A in the liquid, yA is the mole fraction of A in the vapor) remain constant. If enough of either pure component is added, the mixture is transformed to a single phase. The initial vapor-liquid mixture contains 4 mol of A and 6 mol of B at a pressure of 130 kPa. Select “add A” or “add B” and use the slider to select the amount added. If the overall mole fraction of A stays within the phase envelope, then xA and yA do not change. Selecting the “mole balance” button shows how this is possible. The size of a rectangle is proportional to the amount of that phase (blue is liquid, green is vapor). For ease of visualization, A is shown being added as a vapor and B as a liquid, but the final equilibrium is the same if A is added as a liquid or B as a vapor because the system is isothermal. For example, if pure A were added as a liquid, it would vaporize to satisfy the mass balances.

This simulation was made at the University of Colorado Boulder, Department of Chemical and Biological Engineering.  Authors: Rachael L. Baumann, Megan Maguire